Cats are known for being very independent creatures. They are curious and intelligent, and they have incredibly powerful senses which help them to navigate the world like expert ninjas. 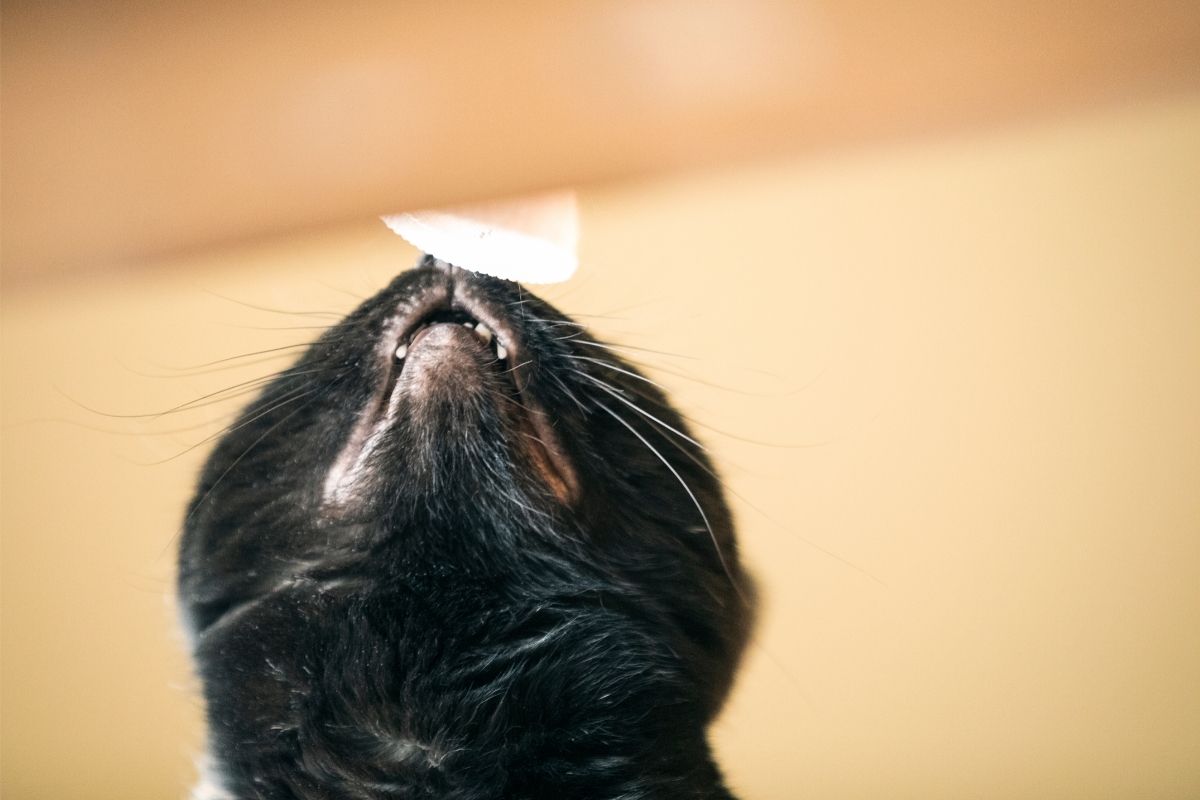 They are often characterized as being sophisticated, aloof, and really rather savvy – that is, until they pull a “stinky face.”

Stinky face is the pet name given to a certain behavior that many of our furry friends display when they smell something.

They open their mouths and leave them open for an oddly long time, causing them to look pretty gormless and comical, to say the least. This does not align with their usual cool-cat vibe, so why do they do it?

If you have ever noticed your cat pulling a stinky face and wondered what the heck is going through their minds, then wonder no more.

We are here to explain why this jaw-dropping behavior occurs so that you pet parents can better understand your feline friend.

The official term given to “stinky face” is the Flehmen Response, as it was first discovered by German ethologists in the 1930s. The Flehmen response is a reflexive grooming behavior that takes place in many mammals.

It is when they pull their upper lip back and expose their front teeth and inhale (usually through the nostrils) for a good few seconds. It looks like a grimace and creates a very strange facial expression in cats.

It occurs when mammals detect pheromones and unfamiliar scents and they want to analyze what the scent might be.

By drawing the upper lip back and baring the front teeth, they draw the scent into a special sensory organ known as the Vomeronasal organ on the roof of the mouth (behind the front teeth).

Scientists think that the sense achieved via the vomeronasal organ sits somewhere between taste and smell.

When Do Cat’s Use The Flehmen Reaction?

So when might pet owners expect to see the flehmen response in cats? Well, this particular body language is actually a healthy and normal response to a new or strange smell. 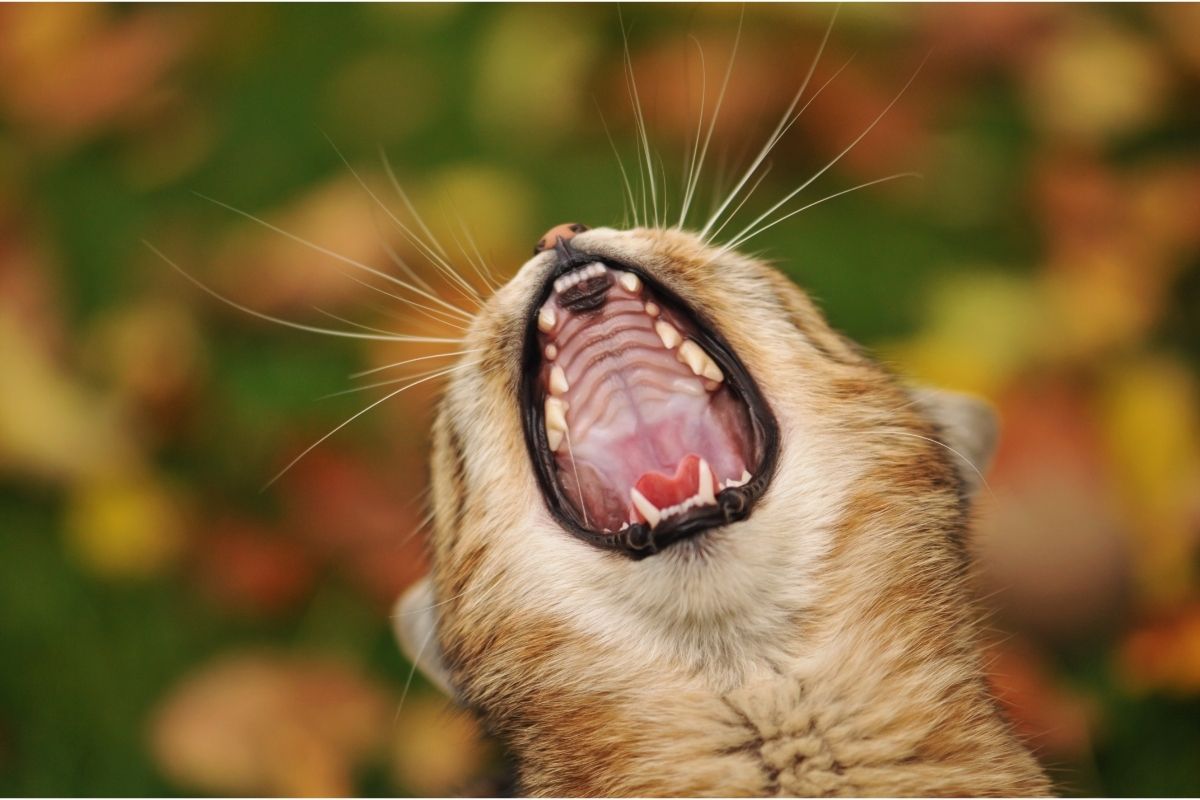 Cats use the flehmen response to check for predators, prey, and potential mates. Cats are highly sensitive to their environments, and they are constantly monitoring things around them. If they sense danger, they need to be able to quickly identify it and react accordingly.

To do this, they must be able to recognize different scents, sounds, and sights. Their noses are extremely acute, and they use their keen sense of smell to find food, track prey and even locate potential mates.

If you offer them new food in their food bowl, a new blanket, kitty bed, or their litter box, you can expect to see your cat performing this weird behavioral response.

In the same way, if a cat discovers your hairbrush, toothbrush, or dirty laundry, you may see this weird cat behavior as they try to detect your pheromones on those items.

What Is The Vomeronasal Organ?

The vomeronasal organ is located in the nasal cavity behind the front teeth. This special organ is responsible for detecting smells. They sit just behind the nose and contain millions of olfactory neurons.

Olfactory receptors send information about the smell to the brain via the olfactory bulb. For the scent to travel through the passageways, it first must be soaked in saliva and then sucked in as the animal inhales.

It can then come in contact with the sensory cells that can decode the chemical message.

The VMO is an amazing organ found in many mammals – not just in cats. Horses, dogs, rats, and mice all have one too!

Is The Flehmen Reaction A Sign Of Aggression In Cats?

Though the Flehmen reaction can look pretty aggressive and scary, there is no evidence to suggest that it is a sign of aggression.

For example, if a male cat is attempting to attract a female, he will perform the flehmen response. He does this by bringing his face close to the ground and sniffing at the air.

This action allows him to pick up any pheromones from her fur, which he then transfers to his own fur.

This process helps him to identify whether she is receptive to mating.

How Do Cats Smell?

Cats have an amazing sense of smell. They can detect odors at concentrations down to parts per trillion. That means that they can tell the difference between water and oil or milk and cheese.

In fact, thanks to the vomeronasal organ, they can smell 40 times more powerful than their human pet owners!

How Do Cats Mark Territory?

Cats are highly territorial animals. They mark their territory using urine, feces, and other substances. These marks allow them to keep tabs on who’s been where and what has happened in their area.

To mark their territory, cats spray urine or deposit feces on objects such as trees, bushes, and fences. They also leave small piles of dirt and dust on the floor.

They will often rub their cheeks against tree trunks and walls to deposit pheromones onto the surfaces. And they will also often nudge you with the side of their faces to transfer pheromones onto you because they love you.

Cats also have scent glands in their paws which is why they perform kneading. Kneading is just another of cats’ weird behaviors, and it involves them rubbing and pressing their paws repeatedly into your lap as if they are kneading dough.

You might think that this is purely a grooming behavior, but it’s actually a way of transferring scent from their paws to your body.

So, all you baffled pet owners wondering why your cat opens its mouth as it smells, be baffled no longer!

It is simply performing the Flehmen reaction and using hidden scent receptors to interpret unfamiliar smells and pheromones in the air. Clever kitty!