Skip to content
Contents show
1 Do Cats Dream?
2 What Exactly Do Cats Dream About?
3 Do Cats Sleep Well?
4 Can Cats Have Nightmares?
5 How Can I Tell If My Cat Is Dreaming?
6 What Happens When You Wake Up Your Cat From Their Dreams?
7 Final Thoughts

The idea that animals sleep is widely accepted, but whether or not cats dream is still unclear. Some studies suggest that they don’t, but some say they do.

Cats are known to be nocturnal creatures, meaning they prefer to spend their nights sleeping.

When your cat is sleeping, you may have noticed little twitches, purrs, or even paws moving. What do these mean?

And, do they mean that your cat is dreaming? 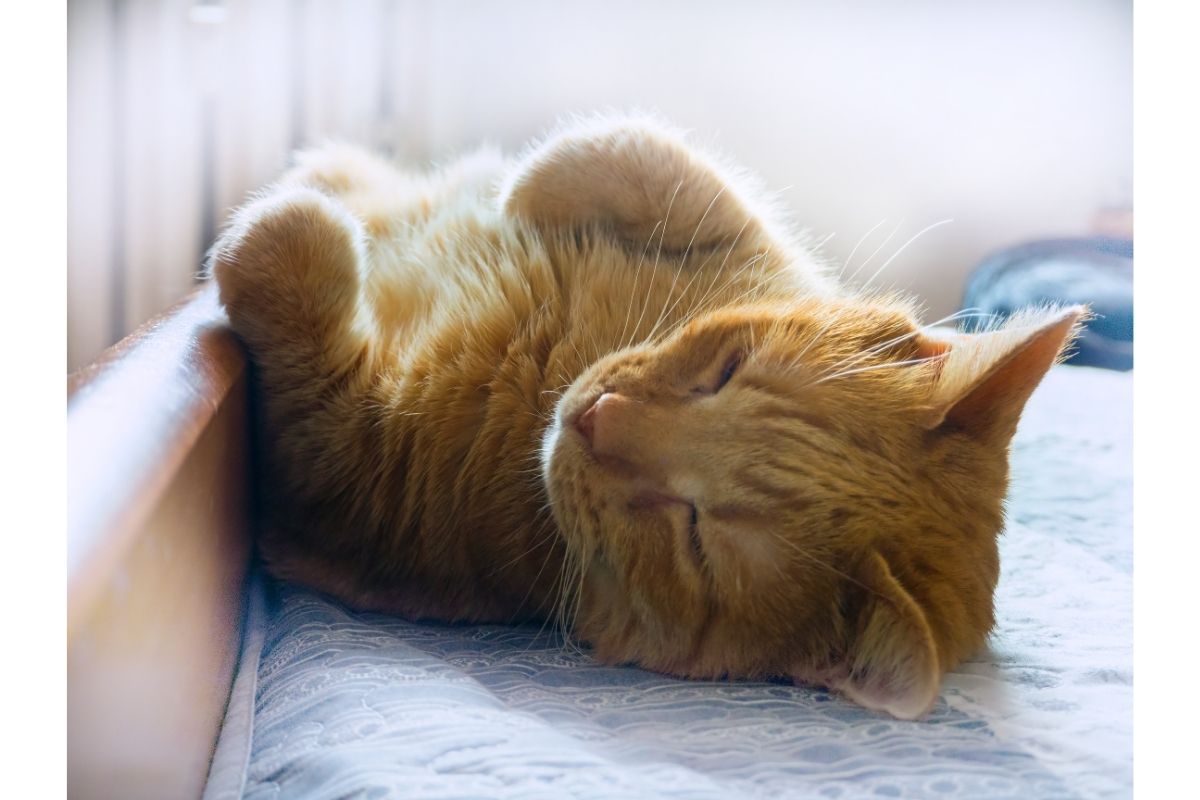 Scientists believe that dreams occur when the brain sends signals from one part of the body to another. This happens in humans and other mammals as well.

However, it has been shown that cats can’t remember their dreams.

So, while we know they’re awake during this time, there’s no way for us to know what they’re thinking.

So, if your cat doesn’t seem to be dreaming, then maybe they aren’t! But, if you want to find out more about how they dream, keep reading!

As humans regularly dream, cats are no different!

Although our dreams as humans may not be things that have happened in our lives, they are actions that we undertake in our daily lives.

Things like running, walking, talking, and dreaming about friends, family members, or celebrities.

This is the same with cats. Cats are most likely to dream about things that occur in their daily lives.

They may dream about eating, washing, or even something that they’ve seen outside.

Scientists have found that during a cat’s REM sleep, their dreams are very similar to their daily activities.

When cats go into REM sleep, they will often twitch, move their paws, scratch themselves, or even hiss. These movements are called REM-related behaviors (RMB).

While RMBs are common among all mammals, including humans, scientists believe that they are also an indication of dreaming.

If your cat does any of these things while asleep, then your cat could be dreaming.

What Exactly Do Cats Dream About?

For example, a cat who was once frightened by a dog might dream about being chased by that dog again.

However, scientists haven’t yet figured out exactly what cats dream about. One theory suggests that they dream about predators because they’re afraid of them.

Another says that they dream about food because they need energy after a long day of hunting.

However, there are differences between human and feline dreams. For example, cats tend to dream about food much more than people.

Researchers have discovered that cats will dream about food at least five times per night. While this might sound crazy, it’s normal for them!

The reason why this occurs is that cats are naturally carnivorous. They eat meat all day long, so they need to eat again before they go to bed.

If they didn’t get enough to eat during the day, they would feel hungry and tired. Therefore, they’d probably dream about food.

Similar to humans, cats can have some problems sleeping and can have a restless night just like we can.

If your cat isn’t sleeping properly, it may wake up frequently throughout the night. They may also startle easily during the night.

These behaviors indicate that your cat needs help getting to sleep.

If your cat wakes up frequently, you could try playing with them more in the day so that they can burn off all of their energy and become tired for the evening.

This is the same with humans, as exercise improves sleep, and it is a very good way to help your cat have better quality sleep.

Can Cats Have Nightmares?

If your cat has ever experienced trauma or stress, this can be shown in their dreams.

As humans, stress and trauma can cause our dreams to become distorted, horrible, or even scary.

Many people report having nightmares when they were children or adolescents.

The reason why these types of dreams happen is because of the traumatic experience that occurred.

For example, someone who witnessed an accident may have nightmares about seeing the event again.

Or, a cat whose owner died suddenly may have nightmares about losing its owner.

How Can I Tell If My Cat Is Dreaming?

If your cat purrs, meows, hisses, or twitches in their sleep, this could indicate that they are dreaming!

However, if they don’t do any of those things, then it’s unlikely that they are dreaming.

It’s important to remember that not every cat will react to its dreams the same way.

Some cats might only purr or meow while they are dreaming, but others might make sounds or twitch. It depends on how each cat reacts to its dreams.

What Happens When You Wake Up Your Cat From Their Dreams?

When you wake up your cat from their dreams, they should act normally.

However, if they seem confused or agitated, this could mean that they weren’t dreaming.

For instance, if your cat was dreaming about chasing a mouse, and you woke them up by petting them, your cat may appear disoriented.

They may also look around the room and wonder where the mouse is.

To conclude, there are several ways that you can tell whether or not your cat is dreaming.

One of the best ways to determine if your cat is dreaming is to observe them closely.

If your cat does anything unusual, such as purring, meowing, hissing, or twitching, they most likely are dreaming.

However, if your cat doesn’t do anything out of the ordinary, it’s unlikely that they are dreaming!

Each cat is different, so they may process their dreams differently.